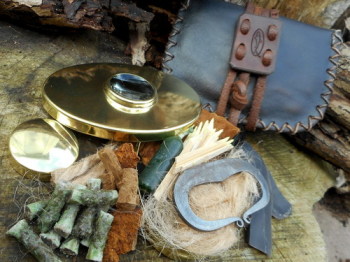 Hudson Bays back in stock…….thankfully our Hudson Bay Tinderboxes arrived back in stock yesterday. Each year we order more and each year we sell out even faster. We know a few other companies sell them as well, but we like to give that little extra with our Tinderboxes. We do research our products, so we know a little bit about the history and the contents of the items we sell. Did you know, for example, that the Guy Fawkes had a Tinderbox on him when he was arrested? Originally, Tinderboxes were made from wood and would have had a 'damper.' A 'damper' is an inner lid that was used to dampen down the ember once the fire had been lit and to protect the tinder from moisture and being crushed. It would have been common for the family Tinderbox to be kept in a little recess near the fire place for convenience and also to keep it dry. These days we are lucky that we can keep our Tinderboxes in a nice central heated homes or some people keep their Tinder dry in self sealed plastic bags! 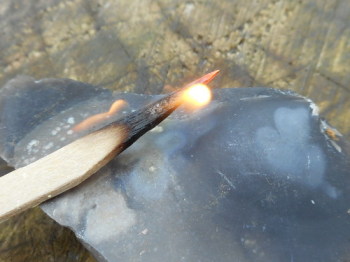 Hand Cut Sulphur Spills….Sulphur Spills or Sulphur Matches have been around since the Roman times, and would' would have been kept in Tinderboxes. Once an ember had been made with the ‘Flint & Steel’ the tip of a Sulphur Match would have been touched to the hot smouldering ember. Since sulphur combusts at a temperature of around 444  C ​(​832° F) and the ember is around 500  C ​(​932° F) or more, the sulphur spontaneously combusts, which in turn ignites the wooden spill. As soon as the match/spill had caught a flame a fire-lay, candle, slow match or pipe etc. could then be lit. The only down side to using  these matches is the smell that they make when being lit, which you don’t want to breathe in, it is very unpleasant.  This is most probably the reason why they were most often bought from a Match Seller due to the noxious sulphur dioxide smell created when making them, whilst they could easily have been made at home. It wasn't until the early 1800s that the 'striking' match that we know today was invented, but that’s another history lesson. Despite the horrid smell, we make our own sulphur matches/spills for our Tinderboxes as it captures a little bit of history. 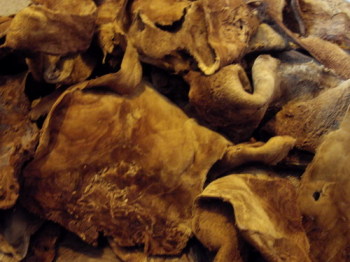 Amadou…. A perfect tinder…. Amadou is another one of those forms of Tinder that has been around for tens of 1000s of years. How an earth someone discovered that a fungus could be turned into such a useful substance we will never know.

Please don't ask how it is made as it is the most boring of processes and can take days (see our articles in The Library ‘How to Make Amadou Tinder’ and ‘Using Amadou For Fire Lighting’ by Mark Hordon.), but Amadou, once it has been processed properly feels almost like velvet. It is one of the very best natural forms of tinder there is next to Chaga, it naturally dries out on the sun when it has become damp or wet and when dry it catches a spark very easily producing an extremely hot ember. The other advantage of Amadou is that it does not disintegrate when bounced around in a tinderbox with the flint and steel, plus it pads the tinderbox contents out stopping them from rattling around.

Some countries call it German Tinder or Black Tinder. Amadou also has other uses too; Modern day fly fishermen use it to dry their flies after they are through fishing and in the past it has been used a tooth packing material and as a reusable sanitary towel because it is so absorbent. There is even a rumour that Scotsman used to use it under their Kilts to keep warm … not sure how true that is as we all know Scotsman don't normally wear anything under their kilts! 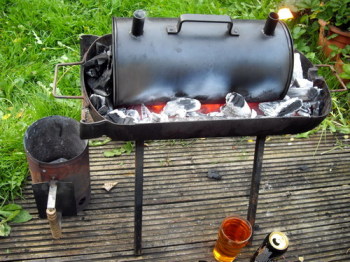 Char Cloth….or 'cooked cloth'… sometimes known as Rag Tinder. Again this has been used for 1000s of years as a tinder. It was so easy to make especially for the poorer households as it was usually made from the oldest of old cloth that was no good for anything else … the ultimate in recycling!!! We at Beaver Bushcraft make our own Char Cloth and in large batches, much to the neighbour’s horror due to the noxious smelling smoke that is produced if not done properly. Char Cloth is easy to make once you have the right technique, however it can go wrong and when it does you can produce a batch that just won't catch a spark. Unlike Amadou, Char Cloth can go mushy if it is bounced around the tinderbox without protection from the Flint and Steel also if it becomes damp. This is why the old Tinderboxes had a ‘damper’ in to keep this Tinder nice and dry and flat and away from the Flint and Steel. 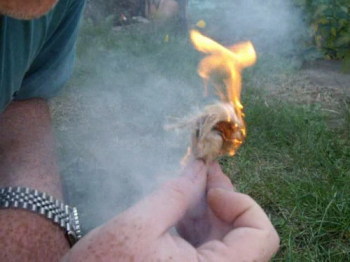 Jute Rope….Jute is a plant fibre that readily burns when fluffed up into a Tinder Bundle. Just one piece of the Jute rope that we use in our tinderboxes can be effortlessly fluffed into a small tinder bundle ready to accept an ember and then blown into a flame because the fibres are not tightly spun in the rope making process. 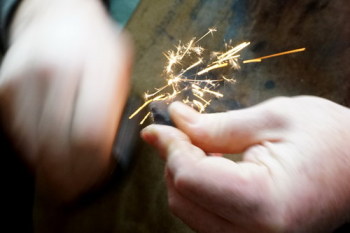 The basic ingredients……These are the basic ingredients we use in our Tinderboxes. For the Hudson Bays we will add either Chaga or some Moxa Tabs as these are great little ingredients to be use with the tinderbox lens. Chaga is another one of those forms of Tinder that has been around for tens of 1000s of years and, like Amadou, it catches a spark easily creating an ember that burns extremely hot. Once you have got a smouldering ember by focusing the sun's rays with the lens (remember your science lessons at school when you learnt focal lengths and when you first discovered glass can be used to set fire to things?), or via the ‘Flint & Steel,’ you can either pop this into a Tinder Bundle you have made from dried grass, fluffed up bark, a Jute Tinder Bundle or use the tip of the sulphur match to catch a flame. 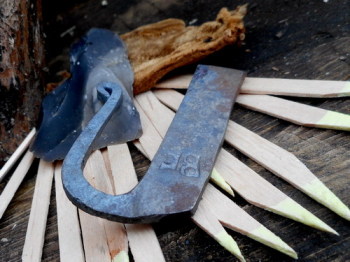 You can add other forms of tinder that you have found in the wilds such as Cramp Ball bits or add other items such as fat wood, a small candle or even a piece of iron pyrite for more ancient form of spark based fire lighting, etc. to your tinderbox. As to the Iron Pyrite & Flint as a form of fire lighting … well that’s another blog for another day!!!!

Do you want to see how to use a 'Traditional Fire Steel' or to see the 'Hudson Bay Tinderbox' in use, please  'Click Here' or visit our video library at the top of this page.