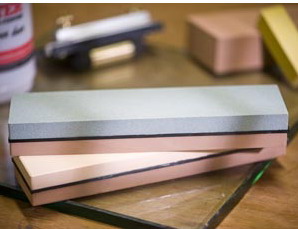 Out of stock.
0 in your basket
View Basket Checkout

The very coarse 250 grit side of the 250/1000 grit Japanese Water Stone cuts hardened steel with amazing speed, and is normally used for badly nicked, damaged or very dull cutting edges, were a large amount of steel needs to be remove quickly. Old and apparently useless knives, chisels and wood working tools can quickly be brought back to life on the 250 grit side of this Japanese Water Stone.

The medium, 1000 grit, side of the 250/1000 and the 1000/6000 grit Japanese Water Stones, cuts with amazing speed, and is used to remove scratches and further refine and partly polish the surface of a cutting edge, following honing on a coarse stone 250 grit. The 1000 grit Japanese Water Stone would also normally be used for every day sharpening of your blade’s cutting edge.

Each of the Japanese Combination Water Stones measures approximately 200mm long by 50mm wide by 25mm high so they are going to last a long, long time.

Water as a Lubricant and Soaking the Stones

As is usual with Japanese Water Stones they need to be saturated and the constantly doused with water if maximum performance is to be achieved whilst they are in use. To do this, simply place your Japanese Water Stones in a bucket of water and leave them there to soak for about 5 to 10 minutes before you start to use them. Then, whilst in use, Keep sprinkling the surface of the stone with clean water and or when it becomes dry. It is important to note, however, that you should never leave Japanese Water Stones in water if there is the remotest chance that the water they are in will freeze, since there is a strong possibility that this may crack your stone.

Japanese Water Stone cut at away steel at an incredible speed, since any grit particles that become dull with wear will simply fall off the surface of the Water Stone revealing fresh new, sharp, cutting grit that lies beneath. Since Japanese Water Stones work so quickly, it is in the nature of them to wear somewhat quicker than an ordinary oilstone. This natural wearing may produce a hollowing, or concave effect, on the surface of the stone, however, it can easily be re-trued using a Ceramic Flattening Stone. Re-truing the stone will allow very accurate honing to be achieved.

Phase One in achieving a truly Razor Sharp Cutting Edge, if your knife blade has become dull or chipped, is to re-establish a proper cutting edge, this is done on this Japanese Course 250 grit Water Stone or a Course Diamond Stone. This 250 grit water stone cuts steel with amazing speed, but as is the nature of these stones, it wears somewhat quicker than an oilstone. However it can easily be re-trued using the Ceramic Flattening Stone.

Phase Two in achieving a Razor Sharp Cutting Edge is to use the 1000 Grit side of the Japanese Water Stone. This side of the Japanese Combination Water Stone is used to refine the work you may have placed in the blade on the 250 grit stone as well as for general sharpening. The 1000 grit stone is ideally used when there is no damage to the blade’s cutting edge, but you need to re-sharpen it once it starts to become excessively dull. The 1000 grit Japanese Water Stone will refine a newly formed cutting edge as well as partially polish it However, if you are not overly fussed about having a Razor Sharp Cutting Edge and all you need is a good cutting edge you will have achieved that it this phase of the sharpening.

Phase Three in achieving a truly Razor Sharp Cutting Edge is to polished cutting edge with the 6000 grit side of the Japanese Combination Water Stone. A polished cutting edge is a lot more efficient at cutting than a non-polished cutting edge, because there is a lot less friction at the point of contact between the two materials; also the microscopic striations will be even smaller, which means that any minute fibres will be less likely to become trapped in the striations and therefore clog up the cutting edge - this is often a problem when cutting meat. Another couple of advantages are that the actual cutting surface of the cutting edge will come to a more highly defined intersection, which basically means that it will be sharper and also the blade will be less susceptible to rusting, especially if the blade is made from High Carbon Steel. The 6000 grit Japanese Water Stone will bring your knife blade edge to a mirror finish.

Phase Four in achieving a truly Razor Sharp Cutting Edge is to is to Strop the knife edge with a good quality leather strop such as the Shark Designs - Field Razor Strop (Deluxe) or Hand Razor Strop. Stropping a cutting edge helps to further polish the edge and if done often enough constantly realigns any curling that might be taking place. There are two main types of strop; one is just a simple strop that has no abrasive properties whatsoever and is basically used to polish and realign the blades cutting edge as already mentioned, the second is what is known as a Honing Strop. The Honing Strop is a basic strop that has been impregnated with a honing compound such as White Jewellers Rouge or something like Tormec’s Honing Paste. Honing will abrade the blades cutting edge, all be it at a very low level, making it absolutely ideal for resetting a cutting edge that is just beginning to dull, back to a Razor sharp state, thereby prolonging the periods between re-sharpening.